We settled into Kabini Jungle Lodges and Resorts for our two day safari adventure. 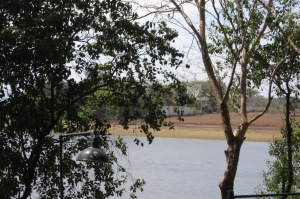 We arrived at the resort early–plenty of time to play on the climbing nets and tire swings. 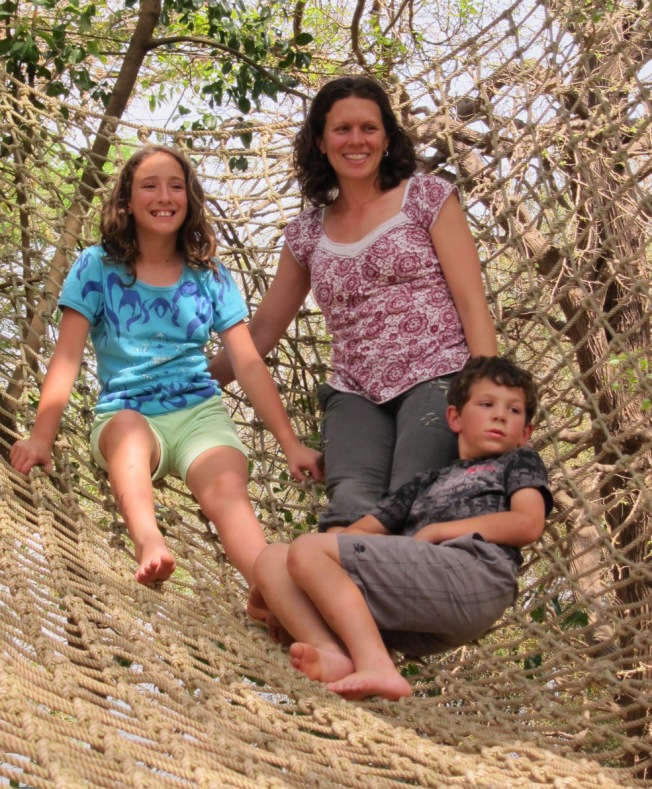 We also explored a termite next close up.The nests are huge  It feels like rock and we didn’t see any termites! To exit the nest the digging type of termites opens holes out of the nest and the the flying termites head out–usually at dusk or night time and only at certain times of the year.  The photo to the right I think is of a termite nest that has been opened up. 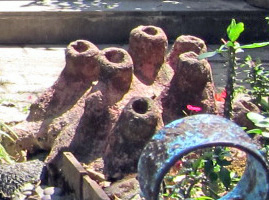 Finally, it was time for a safari. Our first day safari was a three hour jeep safari in the late afternoon in the Rajiv Ghandi National Forest. 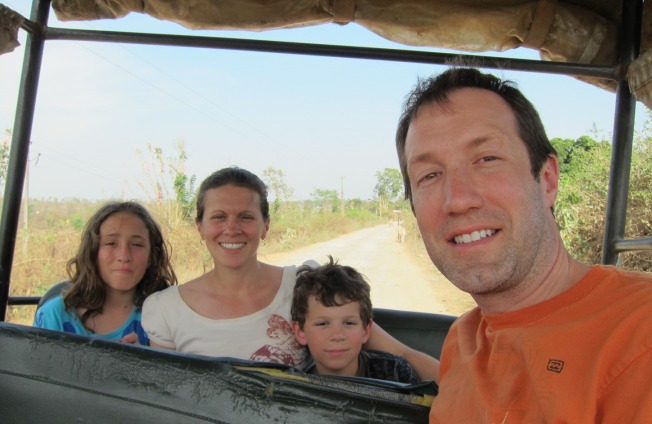 Our \naturalist guide was sexy looking Indian guy named Charles with a monster telephoto lens. A British lady was sitting in the front seat and told us we were in luck because he was the best tracker around and she had come for the past three years. On our way to the forest we had to meander through some villages. And a herd of cows!

The naturalist said that the jeep was required to follow a precise route and every jeep followed a different route and they couldn’t deviate.

He felt that our route had a lot of underbrush making it hard to spot tigers and leopards. He sees a tiger or leopard once in every 9 to 10 safaris so not to get our hopes up.

As we entered the forest we saw lot so long tailed monkey. Very different from the kind that we see closer to home. And a caur/bison crossed the path of the jeeps. 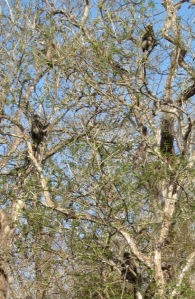 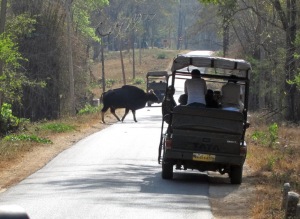 And quite a few peacocks. Turns out that hits peacock mating season so the peacock will only have those fancy fathers for a few months.

We then came upon a herd of caur, which look like bison but are even more massive. They are one of the few animals in the forest that can kill a tiger. This massive herd was actually blocking our way on the road. Here is the bull of the herd. There is usually one male and a pack of females.

Above is a photo of our naturalist in his usual position–half out of the jeep. And the caur blocking the road. They have little to fear because they are so massive. They are one of the few animals in the forest that can kill a tiger.

The herd included a little baby. It was very rare, “very special” said the naturalist, to see such a little baby up close. Plus nursing kiddos.

We learned a lot about how to track leopards and tigers. You listen for the calls of the potential victims—the spotted deer and the larger deer as well. Monkeys call too and the boars and the flying squirrels. The calls are based on smell. They haven’t seen the predator but can smell it and they call out to warn others of an imminent danger. We tried to track the calls to find the predators. We even found a leopard paw print once! 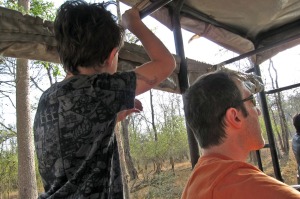 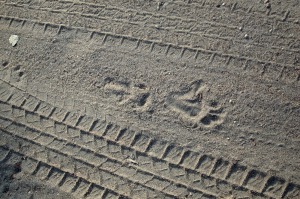 And the jeep that was just ahead of us scared a leopard away two minutes before we arrive don the scene. But no leopard or tigers for us. Just a spotted deer at the watering hole now.

Instead we saw something that as much more rare. The naturalist said he has seen 30 or 40 tigers but only 4 sloth bear during his safaris. We saw a sloth bear with two baby cubs at a watering hole. When they saw us, both cubs jumped on its mommy’s back and scurried away. It all happened very fast. I saw a big black blur and two little ones. But we all saw it, even the kids. Way too fast for a photo but the naturalist was beaming like he won first prize and bragged about our sighting to every jeep that we passed. Here’s what these bears look like (photo from internet). They are very shy and tend to only come out at night. 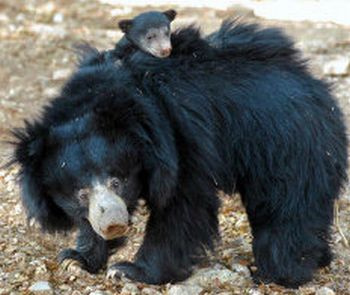 After three hours of literally bouncing around in the back of a jeep, we were hot and tired and hungry. We headed back to our lodge. It is a beautiful place that is actually run by the government. Porters were on hand to offer us coffee and tea and soft drinks and beer when we returned back from the safari. Todd and I enjoyed or coffee/tea and watched the sunset from our porch before we all headed off to see a nature film on the surrounding area and to have a nighttime outdoor dinner.