Kim, Leti and I traveled to The Tata Institute of Social Sciences (TISS) in Mumbai as Ambassadors of Penn State. The two universities are in the process of developing a set of relationships. Our job as to come to learn more about TISS and to share our enthusiasm about the relationship.

Mumbai is most familiar in recent times in the U.S. as the setting for the movie Slumdog Millionaire. It is a city with vast wealth due to being the home of Bollywood and the Indian Stock Market. It also has great poverty, including one slum that hosts over 1 million people. This photo of a neighborhood near the airport shows the disparity of slums and fancy high rises that typifies the new India, and Mumbai especially. 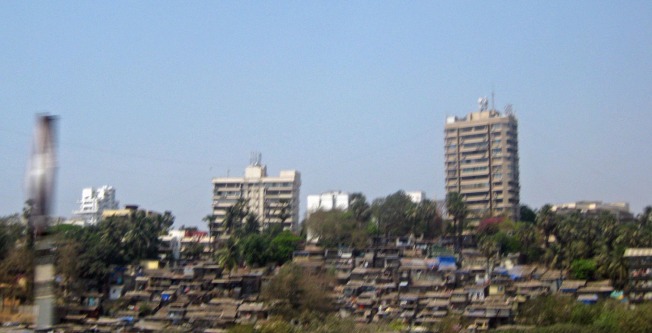 While we had originally planned on booking a hotel, Venkatesh offered that we could be the guests of TISS and stay in their guest house. This was my room.

Here are a few of the buildings on the TISS campus.

Kim and Leti in a conference room, waiting for a meeting. We met with the Director (University President), the Dean, and a faculty member studying ways to improve women in leadership positions in Indian Universities. We also met  with former students who participate in Corporate Social Responsibility Hub–a government funded office that helps state-owned companies find ways to divert funds back into the local communities. All state-owned companies are required to divert funds to local development needs.  The Hub performs need assessments of the communities to help the companies make the best choices of how to spend their funds.

Below, view from the new building on campus. Right, a quadrangle on the old part of campus. 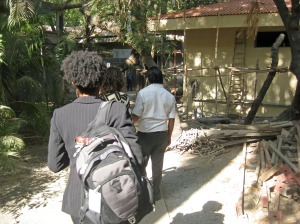 The photo below demonstrates a significant struggle in modern Mumbai. The Rent Act and subsequent legislation allows anyone who squats on land for more than a year to maintain possession of that land. Even if they never owned it. This high rise apartment complex sits right in the middle of the new TISS campus–because they built it and were able to keep it for over a year despite TISS objections. TISS always owned the land but they were not pro-active enough regarding removing the settlement. After time, they lost the land

Kim and Leti enjoyed a quick Auto ride to lunch at an Indian/Chinese restaurant close to campus. 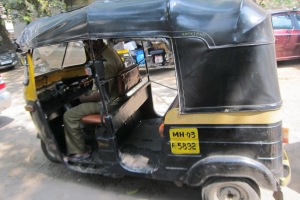 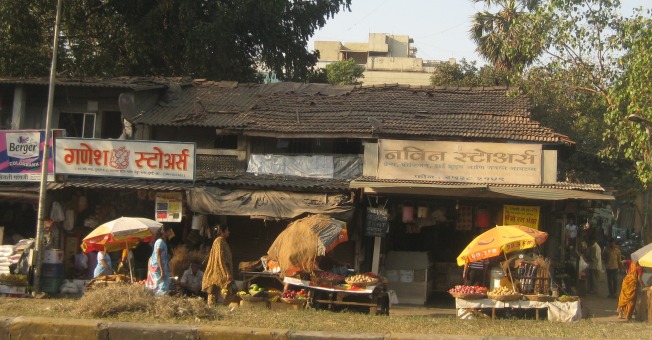