In the morning, I had a special treat—a private yoga session in a beautiful outdoor setting. The kids were totally awesome to give me the gift of that time with no drama. I was so happy and relaxed. Then we headed to breakfast, which was a delicious buffet. I had a spicy madras omelet and Indian tea (i.e., lots of milk and sugar). Kaden enjoyed the muffins. Carson had a chocolate donut. We tried tasting all of the juices—watermelon, marsh melon, lychee, and a green milkshake that started with a p. I also stuffed by purse with peanut butter and jelly sandwiches, muffins and hard boiled eggs for the long drive later in the day. There aren’t McDonalds along the road to stop like back home!

I let the kids have some more time at the grounds of the resort while I packed up. Then they took a brief dip in the chilly hotel pool before it was time to head back out into the town.

First stop of the day was Chamundi Hills, one of the six most holiest Hindu places in South India. The most devout climb 1000 steps to the top to the Sri Chamundeswari temple. We had our driver take us straight to the top. We joined the throngs of pilgrims approaching the shrine.

Again we passed a whole section of vendors, although up here they were more often selling flowers and coconuts to give as offerings in the temple and pictures of the deities. To borrow from a website: “The offering of a coconut is a common offering to a deity in Hindu religion and it is distributed later as ‘prasad.’ The most important reason for offering coconut is that is the purest thing that a human being can offer to a deity. The water and the white kernel inside the coconut are the only unadulterated offering that a devotee makes to the Lord. It is not polluted as it remains covered by the hard outer shell until it is offered to the God. Next, the breaking of coconut symbolizes the breaking of the ego. The coconut represents the human body and before the Lord it is shattered – breaking the ‘aham’ or ego and symbolically total surrendering and merging with the Brahman – supreme soul. 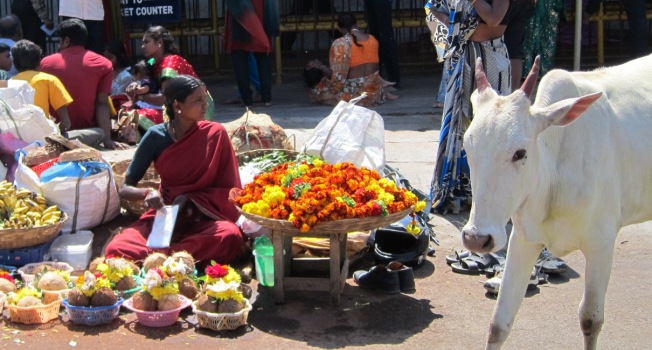 The bowls are brought into the shrine to be offered in front of the deities.

These people are breaking coconuts.

This man is receiving a blessing from a holy man. He puts money on the tray and then scoops up the smoke toward his face. 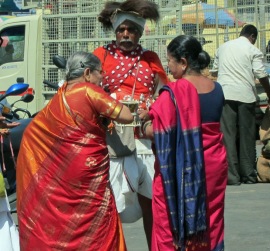 This guy had a hand drum that he would beat and people would come and give him money.

Coconuts for sale for offerings (and maybe for the smashing?)

These holy men offered flowers and a red smudge on the forehead.

When we got to the temple, you could wait in one of three lines—free, rs. 20, or rs. 100 ($2). We paid the big bucks, checked in our shoes and made our way into the temple. You can’t take photos inside, so I’ll just have to describe. First you walk through some flowing water, which washes your feet. Then we joined a CRUSH of people making our way toward the deity. (Okay, I snapped one photo!) 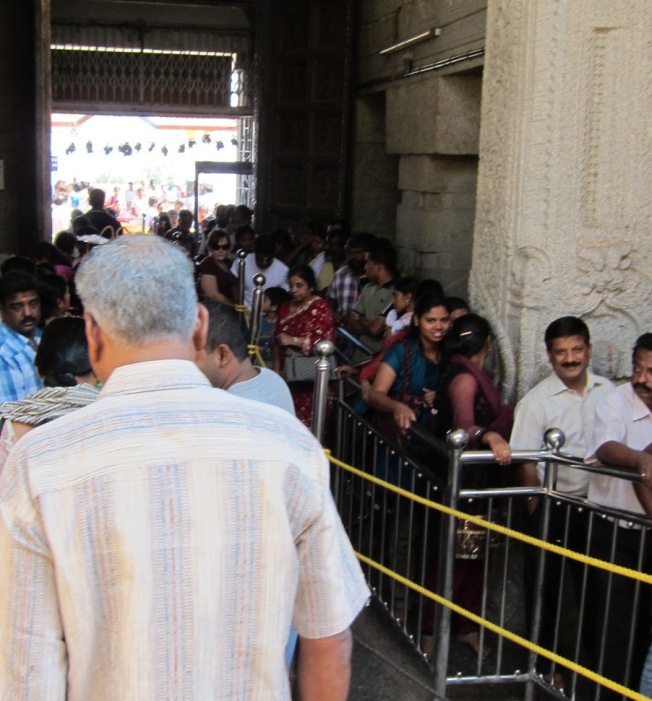 Along the way there were various opportunities to receive blessings from holy men who would put some red powder on your forehead, give you a spoonful of holy water to drink, or some smoke to pull toward your head. The major crush was toward a statue of a deity. The kids were so smushed they did not enjoy this part. And the deity was really far away still when you got to the front where a security guard pushed people along to keep them moving. Some devotees were permitted past this gate, presumably by paying lots more. They had the plates of coconuts and flowers to present to the shrine. Outside this main area were other smaller statues and blessings. While the kids weren’t crazy about the whole thing, I think they learned a lot about another culture and another form of religion in those 20 minutes!

When we exited, it was time to get our shoes back, buy some Lays Ruffles potato chips and sodas and head for our next adventure. Remember those 1000 steps? Well, we walked DOWN a portion of them and had the driver meet us down below.  We passed people sporadically—all of whom were heading UP the hill. The most devout had the red powder and were blessing EVERY step of the 1000. These people looked really tired since they were nearly to the top. Along the way, we also saw goats and monkeys! 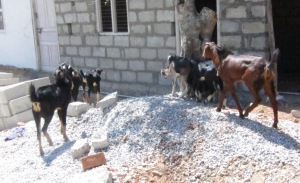 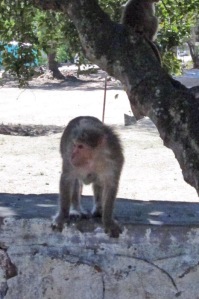 Women sat along the way selling sips of water and snacks to the pilgrims. A few holy men and tiny shrines were along the way. AT one, I received a red smudge and a flower for a few rupees. Carson was freaked out by my smudge, but I figured a blessing from a holy man was something that I could really use these days! The photo to the right, below, is a close up of the steps. Using the same red (or yellow) paint, the pilgrims bless each of the 1000 steps as they walk UP, UP, UP.

We finished our journey at the statue of Nandi the Bull. The driver found us here and we made our way back down into the town. 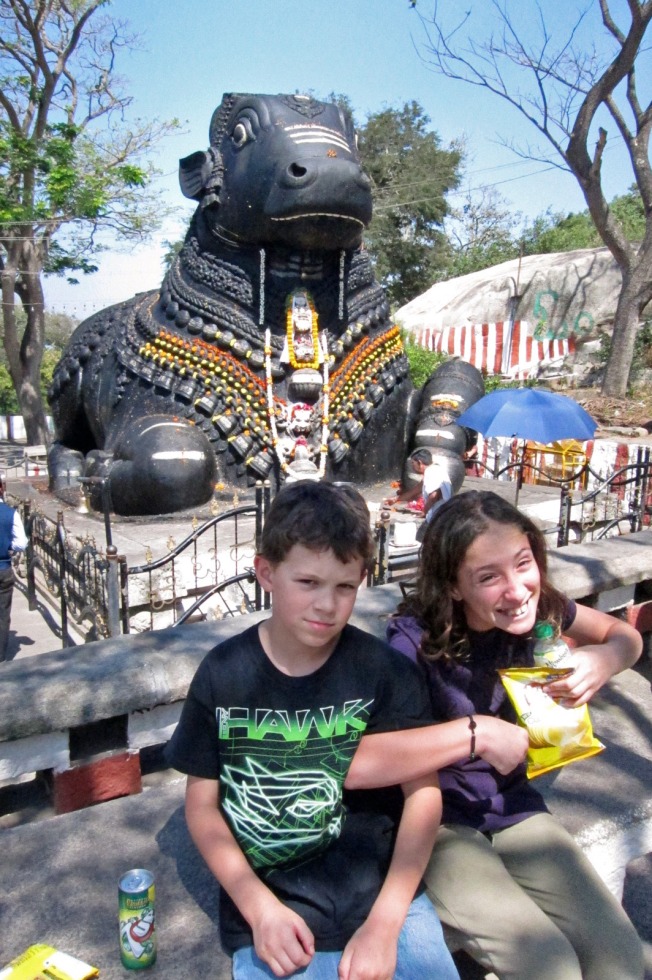 We had one more goal for Mysore—a market. After much nudging of the driver who kept trying to take me to other shops, we finally found Devaraj Market—an old-fashioned bazaar.

The kids were a bit freaked out at first by the narrow stalls and again, the insistent salesmen. But Kaden especially was taken in by the amazing colors and sites. She made good use of her new camera. 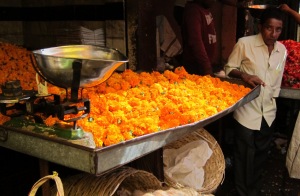 We came upon a perfume/fine oil booth.  This man was THE best salesman ever. We left spending a lot more than I intended, but holy awesome oils—jasmine, rose, lotus, lavender.

I also caved and got a few other things from some persistent salespeople. The sights, sounds and smells of this market were incredible. Imagine smelling sandalwood, incense, curry powder, beeswax, jasmine oil as you wander about small pathways and listen to the salespeople shouting for your attention. 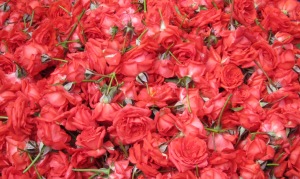 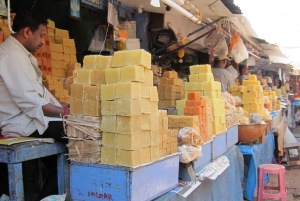 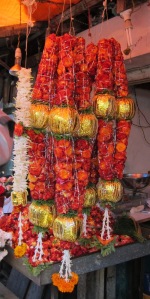 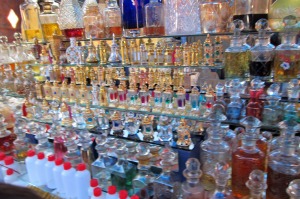 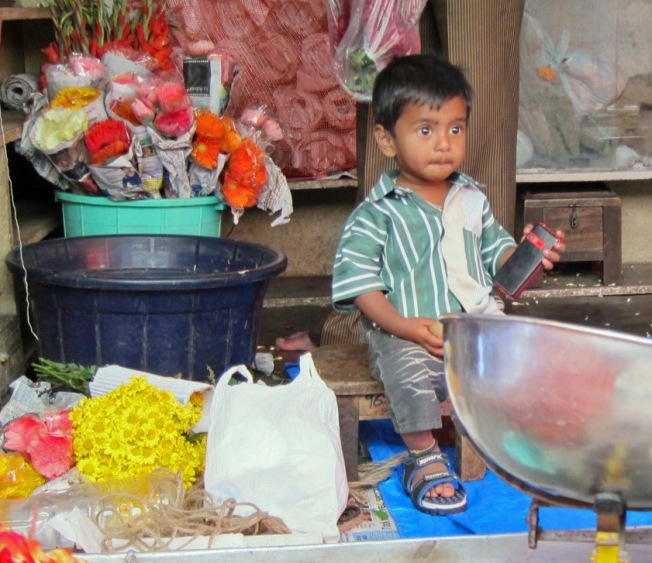 On the way out of the market, I stopped and bought samples of famous Mysore sweets, including Mysorepak—a treat made from ghee (clarified butter) and lots of sugar. I bought a few more as well. We sampled them all but didn’t like any of them.

Walking along the street, we saw women stringing garlands for flowers. And if you look carefully, the photo on the right, below, is of women sitting on the floor in a saree shop on the while the salesman pulls out yards and yards of fabric. 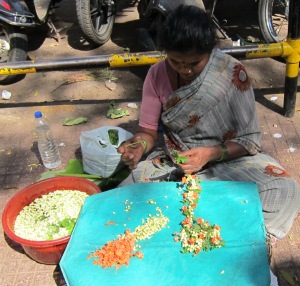 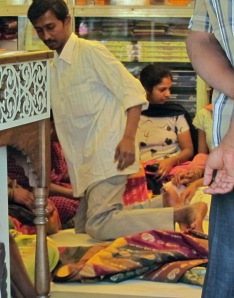 The kids were tired and we decided that we just wanted to make our way to Matikeri and our hotel rather than heading to lunch. But, it turns out, that since I was not explicit in telling the driver to take a lunch break, that he had not eaten yet, and it was 2:00. I am still trying to figure this whole thing out! So I told him to drop us off at Domino’s pizza and we would wait there until he was finished with his break. It seemed that every Ex-Pat in Mysore was in that place! It was actually jarring to be around so many fair skinned people at once after so long in India. The pizza ended up being quite delicious, plus a clean bathroom. We played some Uno and Anthony was back before we even got antsy. 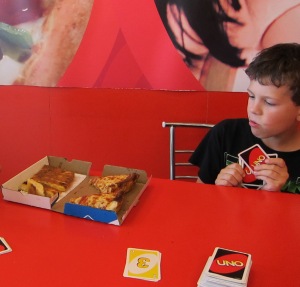 So, on to Mentikeri, which is a hilly region of Coorg, famous for its coffee growing areas.  Based on what I could decipher from the website and reading reviews, we were to be at the Dubare Elephant Camp by 8:30 in the morning for our Elephant Experience. The problem is, the Dubare Elephant Camp is in the middle of nowhere. And being Americans with sensitive stomachs and kids who don’t eat India food, we have to be very choosy about accommodations. Since it was Republic Day weekend, I called six places before I could find one with availability. The nearest place that seemed safe to me was almost an hour away, and the price was higher than I wanted—over $200 (but with all meals included). That was steeper than our beautiful Mysore hotel, but nowhere near at nice.  The Heritage Resort was set in Coorg, an area of big green hills that is famous for its coffee growing. The setting of the resort was one of those hilltops, which was covered in a series of little cottages. 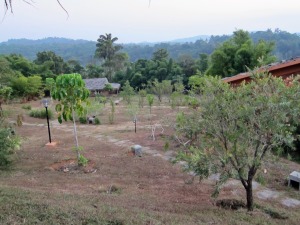 The restaurant looked brand new and was a gorgeous high ceilinged, big windowed place at the very top of the hill, just off the pool. 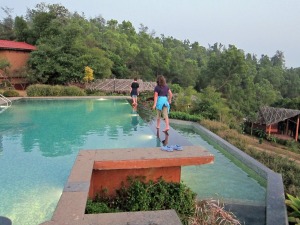 Once it got dark, we needed a flashlight to move about the grounds. I thought it was rustic and fun. Kaden said, “This feels like Quaker Camp.” And she was not saying that in a positive way. The rooms had two single beds and they brought us an extra cot. The walls were plastered and thus uneven. The place was very clean and comfortable, but definitely rustic. 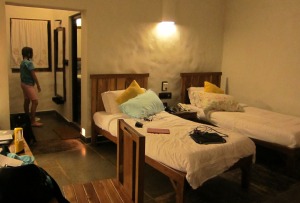 My main complaint was that the shower would not stay on. You had to press a button with your hand. I wonder if it was an Indian shower, since there was a small and large bucket in the shower, with the intention that you fill up the bucket and dump it over yourself in the shower. Kaden was also very unhappy about that. But we all slept really well, other than the roosters around 5:30. The food at dinner was a pretty decent Indian buffet, and the staff even cooked French fries specially for the kids and brought out chocolate and strawberry ice cream for them as well. A meal of French fries and ice cream was enough to put smiles on both kids’ faces and settle them in for bed.