We have one week left in Bangalore. And it is HOT here!  April and May are summertime. Schools are closed. Vacations planned to get away for the heat!

My ambitions seem to falter with every increase of mercury as the temperatures go  up and up. My processing speed now seems to mirror our painfully slow dial up/data stick internet. Thinking quickly, getting work done efficiently by U.S. standards just doesn’t even seem comprehendible. Checking email is a 20 minute process just to open the messages.

Maybe this slowdown is a blessing. I have completely reevaluated my expectations of what counts as a productive day. I take one task at a time and I am grateful if I accomplish that task.  Perhaps I can take this new normal back with me in the U.S. and help to use these measures to carve out a more “normal” pace of productivity at home. Lightning fast internet speeds, access to information right in my pocket is fun. But it also creates its own exhaustions. Doing one thing at a time has its merits.

The kids have slowed down as well, and they seem quite happy to “do nothing” with much less exclamations of “I’m bored” than I hear at home. Being out of school, they have been sleeping late, staying in their PJs until the afternoon. 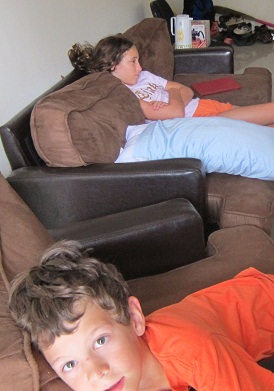 Granted I am letting them play on their screens more than usual. But I know that they are awaiting the punctual 5:30 knock on the door from the neighborhood posse for the evening game of Cops and Robbers. Or an occasional night swim, game of cricket or football. The whole neighborhood seems to come out after dark, really. Sitting in the courtyard visiting with one another. The puppies come out to play. The heat is just too much during the day.

Sanskriti, Pratham and Mehir came a knockin’ this evening to round up the kiddos.

The festivities end when Mehir and Sanskriti, the oldest kiddos at 14 and ethical compasses of the group (well, usually,), decides that it is time to for everyone go home. Usually that end point doesn’t happen until after 9 at night. Carson comes home so tired  that he often falls asleep changing into his PJs and before he has had his dinner.

When we go out, evening excursions  are more appealing as well. The other night we headed to UB City for a bite at Café Noir.

Carson had fun with this poster at the UB City Entrance

The kids had fun getting soaked in the fountains. 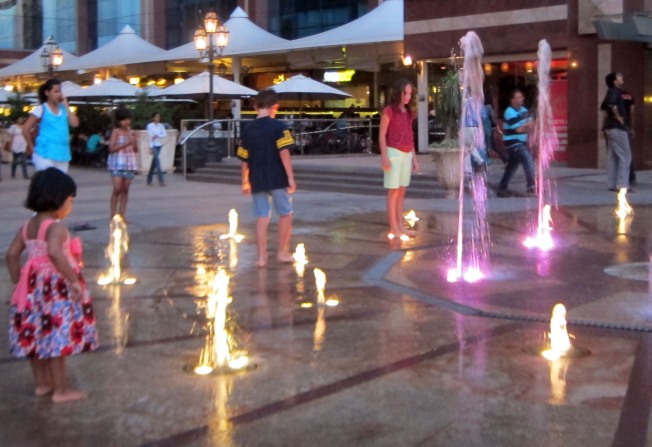 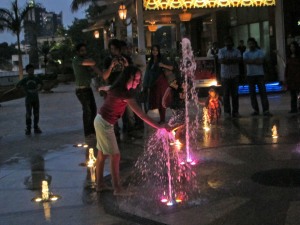 Then we drove past the lit up parliament buildings on the way home. 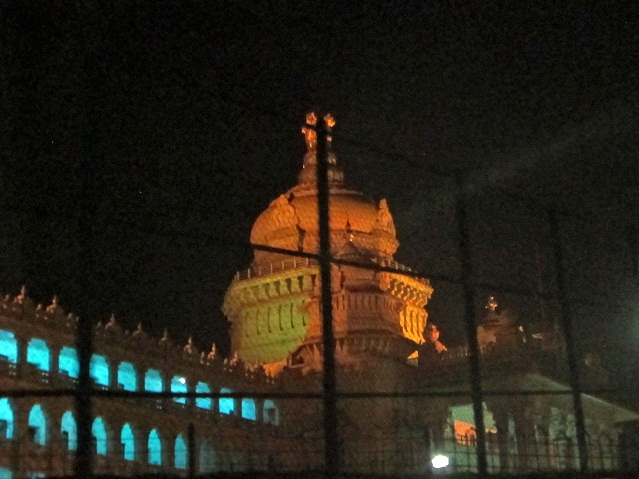 With a stop at Baskin and Robbins for some ice cream. We stopped to watch a few minutes of the cricket match that had the city at a standstill—the Bangalore Royal Challengers versus the Rajasthan Royals.

Below, weddings are still in full force during the summer months!

We also finally got my kids together with my friend Priya’s kiddos. They are the exact same age and gender. Our schedules didn’t connect until this late date. We went over to their house for some swimming. The kids got along great, but unfortunately Kaden developed a tummy bug when we were there and spent most of the visit on the couch. Carson got it the next morning and both kiddos spent the day on the couch. Nothing as serious as the Dehli Belly, but enough to put them out of commission for a while.

At bedtime, sleep is a challenge in the heat. While luckily it does cool down in the evening, not enough for the house to cool well. We have just one bedroom with an air conditioner in our place, and we put it in my parents’ room where they and Kaden sleep. It didn’t seem worth it to spend $400 US Dollars to buy another one when we are here for so short of time. Carson doesn’t seem to mind the heat of our bedroom.  We bought a small oscillating fan for $40 US Dollars. Couldn’t find any box fans at all. And can’t believe the cost of fans in general!

But the oscillating fan broke with 2 weeks left here. I can’t take the heat anymore,  so I have started to sleep on the outside patio on our roof. The first two nights I accumulated 11 mosquito bites on my face, so it was time to get some mosquito netting and make my bedroom a permanent fixture. Very hard to find, mosquito netting. It’s not used much anymore here. But I finally found some for the hefty price of $20 US dollars. I’m just amazed at how much these things cost here!

I just got everything settled tonight in my open air bedroom. And the skies opened up. Our first rain in four months!  The monsoons won’t arrive until June, so hopefully this was a fluke, and I can return to my outdoor sleeping plan tonight.  I have enjoyed the majesty of taking deep breaths in the fresh air and looking up at the stars as I fall asleep.

Mom and I took the kids to a most unusual musical performance on a Sunday evening. But first we had a lovely dinner at an outdoor cafe in UB City called Cafe Noir. It felt like we were in Paris. Delicious pommes frites, omlettes, quiches, and fancy bubbly mocktails.

On the way to the concert, Kaden insisted she didn’t feel well and wanted to go home. The nightly swimming plan with friends awaited, I think. She perked right up at the concert, but all the way to the auditorium, she insisted on wearing a plastic bag around her ears–just in case she might be sick. 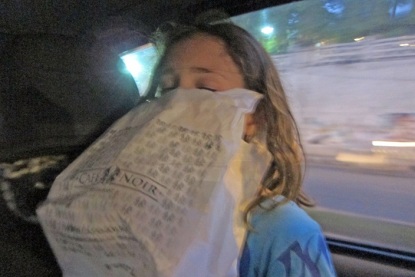 Then it was off to the show, called Questionings. The show was a fusion of Norwegian death metal and Indian classical dance. 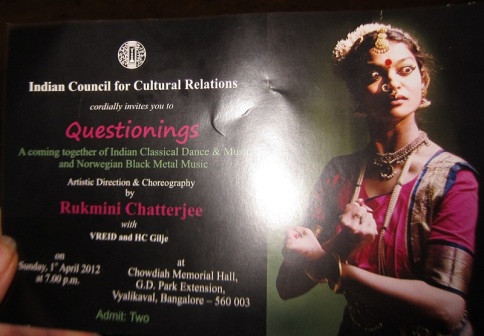 The performance took place in Chowdiah Memorial Hall, a concert hall shaped like a violin.

Inside about 200 people attended this free show.  Choreographed by an Indian dancer, the stage included a tabla player and another Indian drum player, the full Norwegian death metal band including three guitar players and a shirtless drummer all dressed in black, plus three Indian dancers. Two of the Indian dancers mainly spun in circles–amazingly so. Sometimes 25, thirty times in time with the music. They all had bells on their feet and their movements were entrancing.

I took some videos of the evening to try to capture what it was like. The first video shows the spinning of the dancers to tabla music. The tabla player is shouting out the notes and rhythms that he is playing. That kind of rap, almost, is used to demonstrate how tabla playing works but does not usually happen in performances.

The second video shows the main dancer with the death metal dancers around her and also pans out to show the tabla players as well. 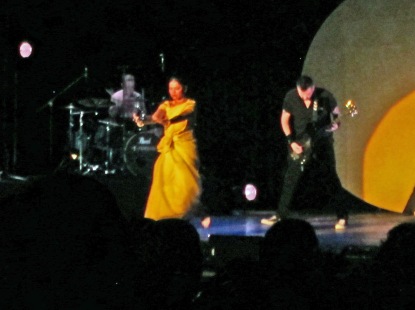 The kids loved the show, although it was so loud we had to stuff cotton in our ears. Carson was bouncing his legs and nodding his head to the metal music. Kaden was entranced by the dancing.